Issued 28th Jan 2023 and as at 7th Feb 2023 - The Coromandel has experienced a severe weather event, with a state of emergency declared on 3 Feb 2023. As a result, SH25a and the Tapu Coroglen roads have been closed. Some local DOC campsites are also closed. Please take care in and around the region and keep up to date through the following agencies. Driving times and routes can be found here.

Home ⁄ A weekend in The Coromandel - Recharge the soul

It was a typical Auckland weekend traffic jam.

Stationary, kilometres from the city, the rain beating down, a sea of red warning signs on my Waze mobile app - it was enough to sap the soul of any city-weary traveller.

But this time it was different. I was calm, chilled, with a sense of quiet satisfaction. That's what a weekend in the Coromandel can do for the soul.

The Coromandel Peninsula, the sometime playground of the disenfranchised nearby Aucklander, has opened a "scenic touring loop" for the future of motoring - electric vehicles.
Fast charge stations have been added at Thames, Tairua, Whitianga, Coromandel Town and Whangamata, to complete a circuit - it's a forward-thinking move that is hoped to be repeated up and down the country. After all this is the future of travel we are talking about.

I was test-driving a top-of-the-line Volkswagen E-Golf to prove to some of my doubting petrol-head mates ("petrol", how quaint) that you can safely traverse the region without, you know, running out of power.

Picking up the car from Melissa at rental firm Europcar it was hard for my partner and I not to be swept up in the enthusiasm she had for the vehicle. She ran through the details (going up hills sees the charge drop, going down a hill with a tap on the break helps recharge) as well as where to plug in. There was also a warning - this a car no-one can hear you coming, so watch out for pedestrians. And she wasn't wrong, turning on the engine you hear nothing ... absolutely nothing.

Melissa also wasn't wrong about the dramatic drop in charge going up hills. Heading up the Bombay Hills outside Auckland provided the odd moment of fear as the charge dropped dramatically, but then I picked most of it back up on the other side. 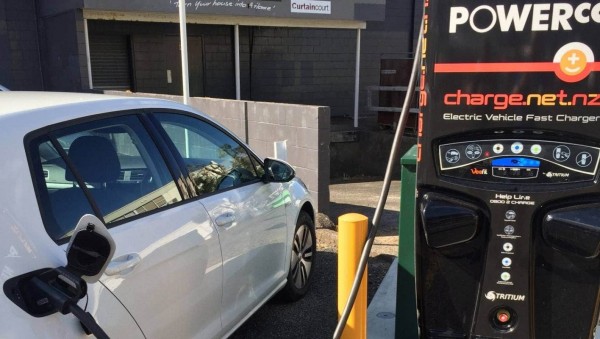 Planning is vital when driving an EV because while there are charging stations dotted around the country, they can be a bit few and far between. This model of E-Golf can go around 250 kilometres between charges so the 115km to Thames proved to be a breeze.

The recharging point was located just behind the town's library. There's two different plugs depending on your model, so you could be in for a queue if someone is in front of you. For our car it took about 40 minutes to completely recharge.

So it gave us plenty of time to go exploring. The annual Santa Parade was due to happen later in the morning and the town was buzzing. The main street was lined with market stalls selling food, crafts and all sorts of random knick-knacks. 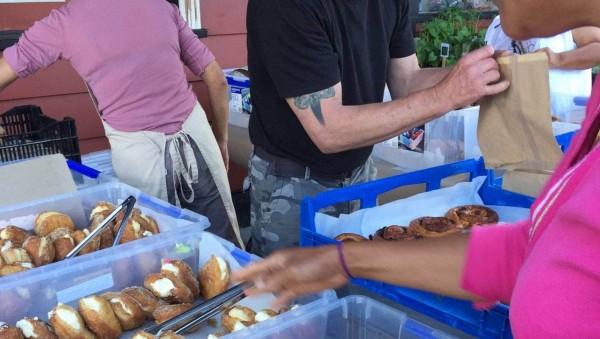 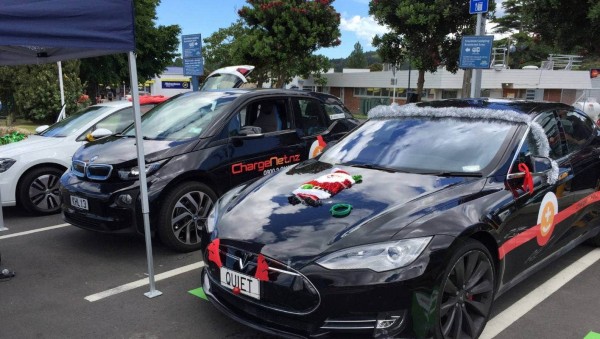 We stopped at Cafe Melbourne to grab some much needed brekkie. Now my partner is from near the Australian city so it had plenty to live up to - it did, in spades. ("Melbourne without pretensions, and not a man-bun in sight," he said). The spicy fried potatoes were excellent, but most importantly the coffee hit all the right notes.

After grabbing a most unhealthy but delicious doughnut from one of the stalls from Albert's Kitchen it was back on the road with the fully charged up EV.

If you have never motored around The Coromandel you are missing out one of the most fun drives in New Zealand. The roads wind around steep hills, houses clinging to cliffs, the Firth of Thames laps at your side, while pohutukawa trees just coming into bloom dot the stunning coastline. The E-Golf cornered masterfully, gripping the road with ease. 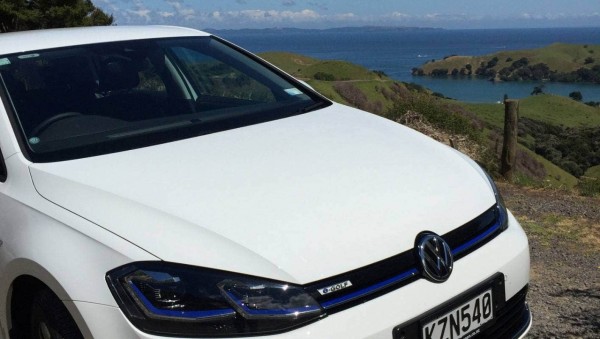 Next stop was Coromandel Town for lunch and another destination gearing up for a Santa Parade (busy day for Father Christmas this particular weekend). As it happened we stumbled upon fellow EV users who were promoting the new loop.

The first rule of electric car club is tell everyone about electric car club (if I was vegan and into Cross Fit it would be the trifecta of things-to-bore-everyone-with). But the unbridled joy that some EV owners have is infectious. These people are proud of their cars and it is easy to see why.

Lunch was at a fairly new-kid-on-the-block Wharf Rd, situated slap bang in the middle of the main drag. Specialising in homegrown goodness with a big focus on organics, we were ably looked after by boss and UK import Ellie. The dukkah-spiced haricot bean salad was simple and hugely delicious.

With all this importance on eco travel, you can't really go around the Coromandel without a trip to the bush itself.

Coromandel Adventures hosts a 90-minute "Guided Kauri Forest Experience". Led by the extremely knowledgeable Sue, we were brought on a short drive on the old 309 Road to Whitianga to first visit the waterfall and swimming hole at Waiau Falls before driving another short distance to a kauri forest.

These magnificent beasts, some hundreds of years old, tower straight up and it's hard not to feel a real spiritual connection to them. The tour moves along swiftly and the walking tracks are pretty easy for all levels of fitness.

If the idea of wide open, clean sandy beaches and the ability to just shut off from the hurly-burly appeals, then you can't get a much better place than the tiny village of Kuaotunu. Located about a 30-minute drive from Coromandel Town this is definitely a destination to just get your feet in the sand and chill.

Taigh Na Mara (that's Gaelic for House By The Sea) is a B&B just a hop and jump from the sea. Owner Carol Blair is a long way from her roots in Scotland's Orkney Islands but she has fashioned herself a comfy, homely environment.

There are two rooms to stay in and they are well appointed with all the conveniences for a switched-off stay (no TV in the room, but there's wi-fi if you don't want to completely drop the modern world). Carol can rustle you up an evening meal for an extra cost but we were heading to the gem of a bar/restaurant that is Luke's Kitchen. 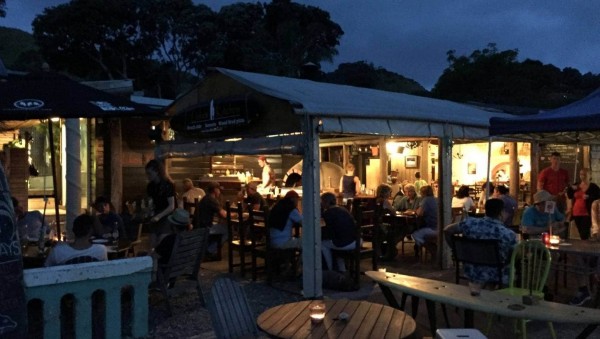 Originally just a van and a couple of tables, this laidback location has expanded to suit the needs of the locals and the ever increasing number of tourists. Often with musicians playing this wouldn't look out of place in Hawaii, with a chilled surfer vibe minutes from the beach. It's famous for its pizzas and its easy to see why. Huge portions with some great tap beers (try the IPA) - it was a perfect end to the day.

The next morning, suitably relaxed and with good food in our belly thanks to Carol's breakfast (top tip - try her legendary selection of jams), it was off to another of the must-do events in The Coromandel - taking a cruise around the world-famous Cathedral Cove.

After a short drive from Kuaotunu to Whitianga, we hopped aboard the Glass Bottom Boat for a tour around the stunning coastline. From the towering Shakespeare Cliff, to the secluded Cooks Beach, it is easy to see what captivated explorer Captain James Cook some 250 years ago.

Our guides stopped in tranquil bays where we viewed the world beneath through the glass bottom. You do have the chance to snorkel at various points but today's passengers didn't seem the snorkelling kind.

The scenery was breathtaking but as the weather was starting to close in we made our way back to Whitianga, before the 35-minute drive to our final charging station in Tairua. Again it was a 40-minute stop, no queue, and a chance to get some final grub in before the drive back to Auckland.

But not even the nose-to-tail slow venture back over the Bombays could wipe off a weekend of quiet recharging of the mind and soul.

Alan travelled to The Coromandel with Europcar and Destination Hauraki Coromandel.


What's happening around The Coromandel